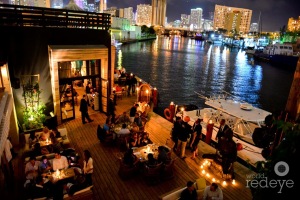 A federal judge in Fort Myers ordered Miami restaurant Seasalt & Pepper to take “sea salt” off its signs, menus, ads, website and social media efforts by Jan. 1, according to the Naples Daily News.

The permanent injunction against the Miami River seafood brasserie was the result of a lawsuit filed in April by Naples restaurant Sea Salt, which claimed a trademark infringement in Seasalt & Pepper’s name (Sea Salt has had a federal trademark on its name since March 2013).

Court records show the two sides reached an agreement, the terms of which were not disclosed, and that Seasalt & Pepper will pay the plaintiff’s legal fees and other penalties if it does not comply with the injunction. As of Nov. 30, the restaurant’s social media and website still had “Seasalt” branding.

We’ve reached out to the restaurant’s representatives for comment. The 1-year-old Seasalt & Pepper is opening a new restaurant-within-a-restaurant this week: Modern Garden is set to open Wednesday at 422 NW N. River Dr. Will the entire space become Modern Garden, leaving the litigious Seasalt a grainy memory? Stay tuned.

FOR IMMEDIATE RELEASE Contact: MelG Group 305.926.6083 Mel Gonulkirmaz brings passion and innovation to the Hospitality Consulting Industry Miami, FL: September 23, 2014 – A 23 year veteran in the hospitality industry, Mel G’s hands-on experience in the restaurant and hospitality industry has proven invaluable to clients of the MelG Group. He has served as Consultant for several projects under the MelG Group brand including the management of Taverna Opa, a Greek restaurant in Brickell, Florida, the start up and launch of the Latin-Asian fusion inspired Bloom Wynwood Restaurant in Miami Florida and most recently the launch of Japanese Steakhouse and Hibachi called Yoko-San in Boca Raton, Florida. His services as Consultant to these businesses included but were not limited to guidance on pre opening, menu development, concept development, wine, beverage and mixology development, staff training, operational analysis, social media marketing as well as implementing training for both the front of house and back of house operations.  Mel’s first venture into the restaurant industry developed while honing his skills in hospitality as a member of the Royal Caribbean Cruise Line team. He opened his first restaurant – Seventy One – in Miami and was awarded the Keys to the City of Miami by then Mayor Manny Diaz for his contribution to businesses in the city. After some time, Mel decided to return to his hospitality roots, starting with a short tenure with the W Hotel in New Orleans as an Assistant Banquet Manager before beginning his foray into culinary management with positions as Director of Operations at the Embassy Suites and later at the prestigious Hyatt Pier 66 Hotel, a part of the LXR Luxury Resorts and Hotels. While at the Hyatt Pier 66, Mel had the opportunity to work with and learn from Shai Zelering, then Vice President of Food and Beverage Operations, along with Carlos Molinet, both prominent personalities in the hospitality industry in Florida. Mel credits his time spent in the hospitality industry for providing him with a well-rounded perspective that continues to serve him in managing all aspects of restaurant operations. "It's psychology in the front (of the house)," he observes, "and… physics and passion in the back." He returned to the restaurant industry in 2007 serving as General Manager at the celebrated Lombardi’s Italian Restaurant and Badrutts Place in Brickell Village before opening his second restaurant now under the MelG Group Brand – IL Scala Ristorante in Red Hotel inside the Red Hotel in South Beach while simultaneously managing the operations of the Miss Yip Chinese Restaurant. It was during this time that Mel realized that his developed skill set along with his distinct ability to discern patrons’ needs could be best utilized by assisting others with their restaurant operations. His company, MelG Restaurant and Bar Consulting, aims to assist restaurants with implementing cost-cutting measures, creating organizational manuals and procedures and providing competitive market surveys and marketing positioning analysis among other services to assist new and struggling restaurants, bars, hotels, banqueting facilities or catering businesses become profitable. ~ * ~ MelG Restaurant and Bar Consulting, based in Miami, Florida, was founded in 2008. The group provides consulting services to the hospitality industry internationally. Website: www.melggroup.com/